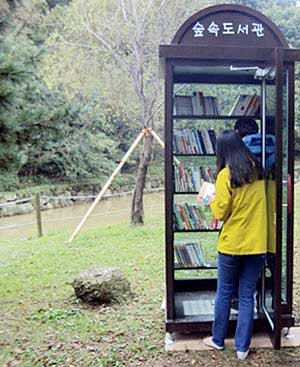 At the base of Baekyang Mountain, one of Busan’s most popular outdoor destinations and a surprisingly cool refuge from the summer heat, a walking trail that begins at Mora Station leads visitors along a small creek and through a dense growth of trees. In a small grass clearing just before the entrance to Unsu Temple, the oldest Buddhist temple in the county, sits one of the city’s four Forest Libraries… 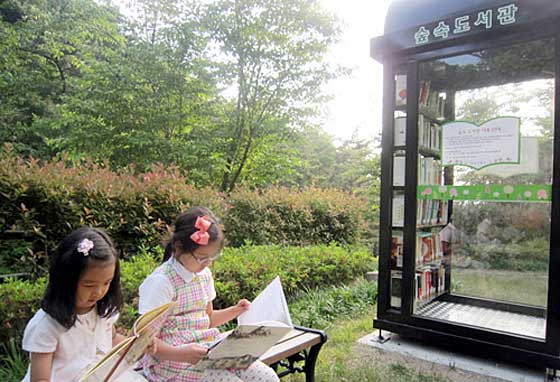 “The Forest Libraries were opened as part of a national campaign to promote reading, made official with the designation by the Ministry of Culture, Sports and Tourism of 2012 as the National Year of Reading. The goal of the initiative is to encourage Koreans to read at least twelve books by the end of the year, and the forest libraries have been designed so that would-be readers do not need to carry around heavy books or confine their reading to specific locations.”

With no regulations, requirements, or fees for borrowing books, the Forest Library is open for any who would like to read, and visitors can borrow books at any time of the day and return them whenever they are finished. Since the first Forest Library opened in March at a park near a local middle school, followed by three additional libraries in public parks throughout the city, a growing number of curious visitors have made their way to the unique spots.